Anatomy of the Foot and Ankle

The foot and ankle joint consists of 28 bones and is a complex system which provides us with the ability to walk, run and jump. This part of the body is able to adapt to uneven terrain, provide shock absorption and allow for even and stable mobility during the gait (walking) cycle.

Motion of the Foot and Ankle 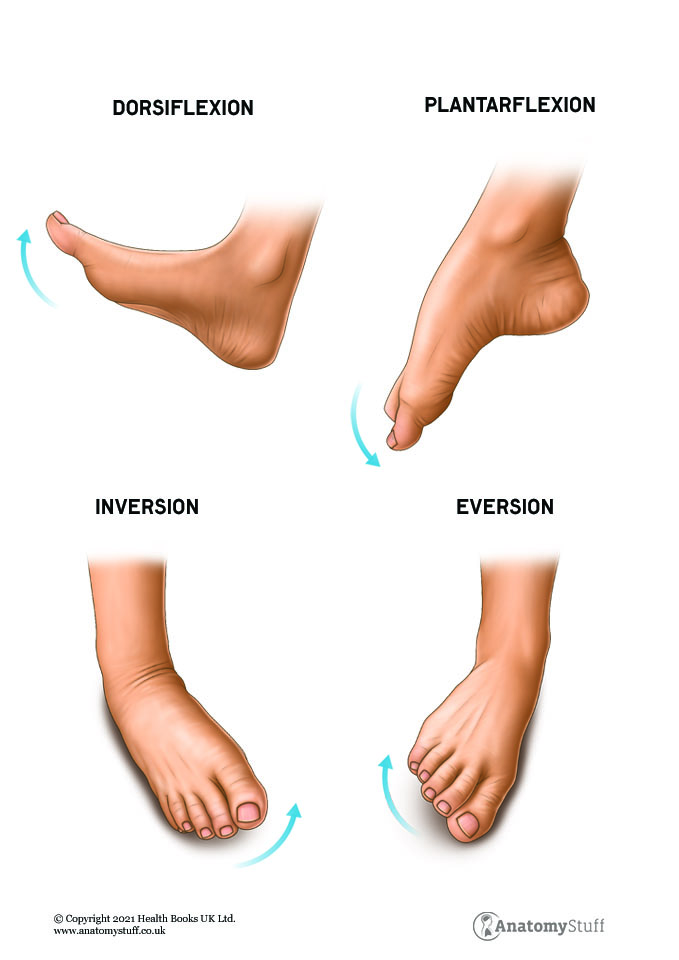 Bones of the Foot and Ankle

The hind foot connects the midfoot to the ankle and is made up of the talus and the calcaneus. The talus is an important bone because it has three articulations. As mentioned before the talus articulates with the end of the tibia and fibula as well as the calcaneus and the navicular bone. This bone is important transfer weight over the ankle joint.

The calcaneus is known as your heel bone and acts as a lever during dorsiflexion and plantarflexion of the foot. This bone has an important role in weight bearing and providing stability during walking. The calcaneus articulates with the talus and a bone called the cuboid.

The bones of the midfoot are called the navicular, cuboid, lateral cuneiform, medial cuneiform and intermediate cuneiform. The midfoot connects the forefoot to the hindfoot and helps to form the arches of the feet.

Joints of the Foot and Ankle 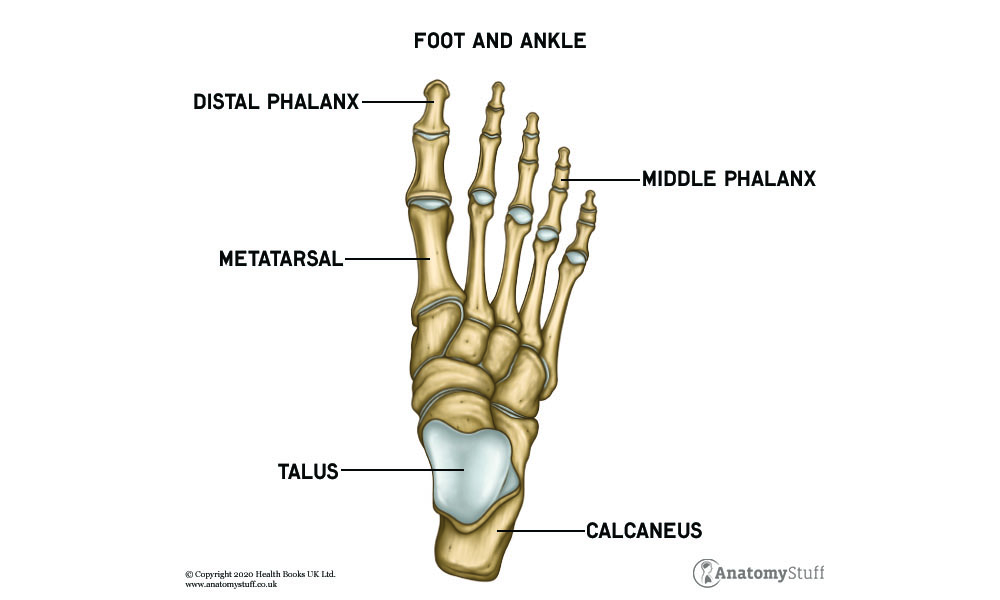 Muscles of the Foot and Ankle

There are three compartments of the lower leg which contain muscles that insert into the foot. These are all extrinsic muscles because these muscles are located in the lower leg.

Extrinsic muscles of the foot and ankle

The lateral (outer) compartment contains peroneus longus and peroneus brevis which evert and plantarflex the foot.

The superficial posterior (rear) compartment contains the gastrocnemius, soleus and plantaris. The gastrocnemius inserts into the calcaneus where is becomes the Achilles tendon. This tendon assists the gastrocnemius and the soleus with plantarflexion and also has a role in stabilising the foot and ankle.

Intrinsic Muscles of the Foot and Ankle

Intrinsic muscles of the foot and ankle are muscles which are located within the foot itself. These muscles can be split into dorsal (top of the foot) and plantar (base of the foot) muscles.

Ligaments of the Ankle

A ligament is fibrous connective tissue which attaches bone to bone. The ligaments within the ankle joint stabilise the ankle and resists against excessive movement and rotational stress.

The medial collateral ligament attaches to the medial malleolus and the calcaneus, talus and navicular.

Ligaments of the Foot

The Lisfranc ligament stabilises the bones in the midfoot. The inter-metatarsal ligaments keep the metatarsals moving together.

Arches of the foot

The arches of the foot play an important role in helping with weight bearing, shock absorption and propulsion during everyday activities. They are made up of bones, ligaments and muscles which support provide support when walking. There arches consist of the medial longitudinal arch, the lateral longitudinal arch and the transverse arch.

Blood Vessels of the Foot and Ankle

Arteries are blood vessels that carry oxygen-rich blood from your heart to tissues of your body.

One branch of the popliteal artery gives rise to the anterior tibial artery which supplies blood to the anterior compartment of the leg. When this artery reaches the ankle, it is called the dorsalis pedis artery.

The fibular artery is a branch of the posterior tibial artery that supplies the lateral compartment of the leg.

Nerve Supple of the Foot and Ankle

The nerves in the foot allow you to feel the world you walk around by transmitting signals to your brain. The superficial peroneal nerve, deep fibula nerve, tibial nerve, sural nerve and saphenous nerve all supply innervation to the foot. These nerves originate from the sciatic nerve, a large nerve branch that branches from the lower back, through the hips and buttocks, and down the leg to the foot. 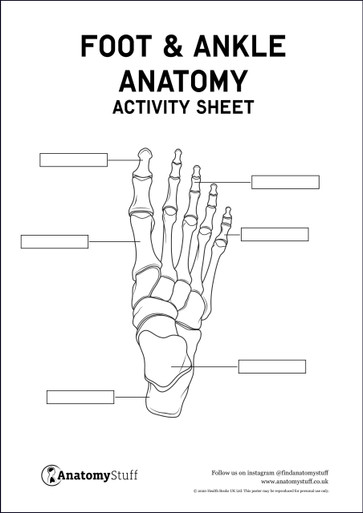 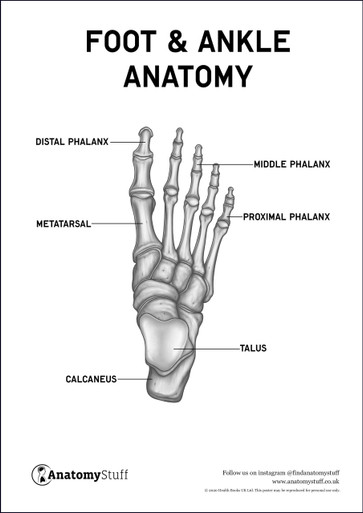 Did you know there are over 7000 nerve endings in each foot! 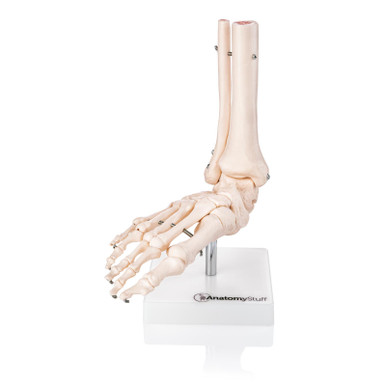 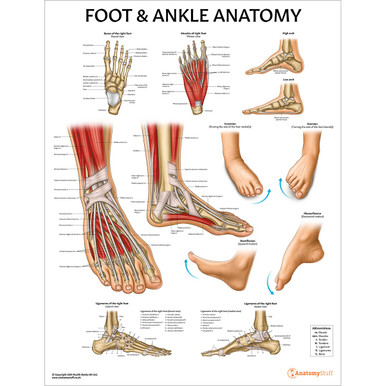 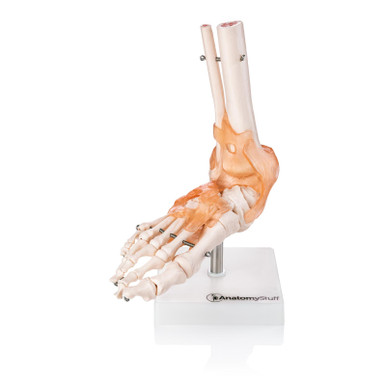 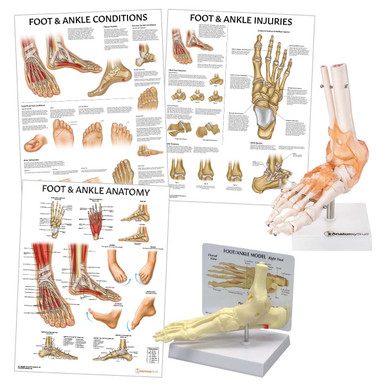