How we address each other is important as it’s a mark of respect and creates a mannerly first impression. Also being informed on how others wish to be addressed or identified is key to good social responsibility. While some people are uncertain of their identity or sexual preference, many more are fully aware of exactly who they are. Knowledge around certain sexual and gender terminology is essential so that we know what each term or abbreviation stands for.

The acronym used to represent lesbian, gay, bisexual, transgender, queer/questioning, intersex, and asexual people as a community. The + symbol represents the many other gender identities and orientations that are also part of the community, such as pansexual, non-binary, etc. There are varying longer versions of the acronym, but it is ever-changing and evolving as the community grows and flourishes. 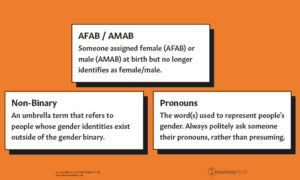 There are many other important LGBTQIA+ terms to learn:

Someone who was assigned female (AFAB) or male (AMAB) at birth but no longer identifies as female/male.

People who experience sexual/romantic attraction to others.

A straight and/or cisgender person who supports LGBTQIA+ rights and equality.

Someone whose gender expression involves a mixture of characteristics that are stereotypically seen as male and female.

A person who experiences little to no romantic attraction to others. Some aromantic people may experience sexual attraction.

An umbrella term referring to people who feel little to no sexual attraction to others.

Someone who fears or dislikes people who are attracted to people of more than one gender due to false prejudices and stereotypes.

Bisexual refers to people who are romantically and/or sexually attracted to more than one gender.

Someone whose gender identity is the same as the one they were assigned at birth.

When a person decides to tell others about their sexual orientation and/or gender identity for the first time. Coming out is a very personally significant experience that should be chosen only by the person themselves – you should never “out” someone.

Verbal permission to do something, e.g., consenting to sexual acts or using a certain pronoun. Someone has the right to revoke consent (change their mind) at any time.

Referring to a trans or non-binary person by their birth name (i.e. deadname) after they have changed it.

Someone whose gender identity falls under the non-binary umbrella partially identifies as male or female and gender-neutral (e.g., a demigirl might use she/they pronouns).

An umbrella term referring to people who only feel sexually and/or romantically attracted to people after they have formed an emotional bond with them.

This used to refer primarily to a man who is sexually and/or romantically attracted to other men. However, gay is now used as an umbrella term to refer to same-sex attracted men, women, and by some people with a multi-gender sexual orientation who are currently engaged in same-sex relationships. Some non-binary people also identify with this term.

The societal differentiation between characteristics makes up the preconceived ideas of masculine and feminine. Gender is a spectrum of males, females, and everything in between (i.e., outside the gender binary). Some people identify as genderless (agender) or gender-neutral. It is very personal, and only you will be able to determine how you identify.

When someone feels uncomfortable and/or upset because their physical body does not match their gender identity, both trans and non-binary people commonly experience this.

Someone who fears or dislikes people who are attracted to the same sex due to false prejudices and stereotypes.

Someone who was born with reproductive and/or sexual anatomy that doesn’t conform to the stereotypical idea of male and female anatomy.

Male to female, female to male (sometimes used by trans people to describe their transition).

An umbrella term refers to people whose gender identities exist outside of the gender binary (the preconceived ideas about male/female gender). Some people prefer to refer to themselves primarily as non-binary, whereas some people will prefer a more specific term that falls under the non-binary umbrella. Some examples of non-binary gender identities include genderfluid, agender, demigirl, neutrois, etc.

Someone who is attracted to all genders and whose sense of romantic and sexual attraction is not limited by gender.

The word(s) used to represent people’s gender. There are a wide range of pronouns to represent all gender identities, such as he or she for cisgender people, they/them for agender people, etc. Some people, such as genderfluid people, like to use a combination of pronouns (e.g., she/they, or she/they/he) and some people use custom pronouns (e.g., xe/xhe or zhe, etc.). Always politely ask someone their pronouns, rather than presuming their preference.

An umbrella term used by people in the LGBTQIA+ community who prefer not to use specific labels to define their sexuality.

Someone who is exploring their sexual orientation and/or gender identity.

A term assigned to a person at birth based on genitalia and reproductive functions.

Experiencing sexual desire towards another person or group of people.

Someone who is heterosexual and experiences romantic and/or sexual attraction towards people of the “opposite” gender (typically a male and a female). Some people within the LGBTQIA+ community who identify as having fluid sexuality may sometimes refer to themselves as straight if it is relevant to them at the time (this also applies to multi-gender attracted people, such as bisexual or pansexual individuals, who may wish to use this term when romantically or sexually engaged with someone of the “opposite” gender).

Used to describe a trans person’s transition to their desired gender. Every transition is unique and specific to the person. This can include things like dressing differently, changing names, coming out as trans, hormones, surgery, etc. It’s important to remember that not all trans people want to have surgery.

Someone who fears or dislikes trans people due to false prejudices and stereotypes.

Don’t forget there are many other gender identities and sexual orientations not covered by this guide, but they are just as valid as any of the terms listed here. Be kind to one another and, above all, celebrate each other’s differences.

Respecting without judgement can transform a person's life! 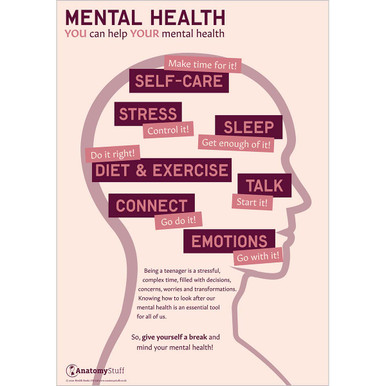 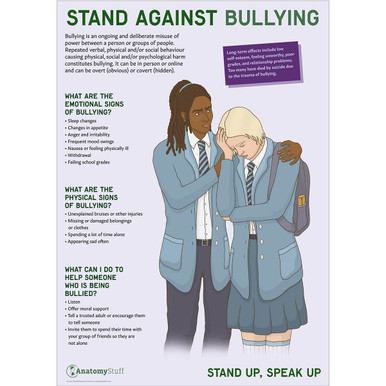 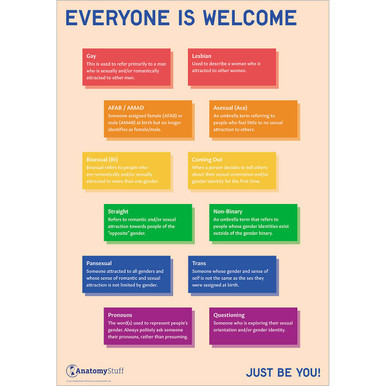