Our skin is the organ that responds to touch and sends messages to our brains which decipher the kind of touch experienced. Through haptic perception, skin can detect hot and cold temperatures, pressure, rough and smooth surfaces, itchy and ticklish sensations, pain, vibrations and more.

The skin consists of three major layers. The epidermis is the top layer which is protective and is able to regenerate fast. It contains pigment cells, keratin, it can make vitamin D when exposed to sunlight and also produces sweat which helps to regulate body temperature and dispose of unwanted chemicals in the body. The dermis lies beneath the epidermis and contains most of the skin receptors, capillaries, hair follicles and nerve endings. The last layer of the skin is the subcutaneous layer, which helps with insulation and storing energy. This contains subcutaneous flat, larger blood vessels and connective tissue, which helps to attach the skin to the tendons and muscles below.

The network of receptors and nerves which help to form the sense of touch is known as the somatosensory system. This is the part of the sensory system concerned with the conscious perception of touch, pressure, pain, temperature, position, movement, and vibration which arise from the muscles, joints, skin, and fascia.

When touch occurs, A response is triggered to a stimulus of a receptor, carrying an electrical discharge to the nerve endings. The impulse travels up the spinal cord to the brain and sensation is registered at the somatosensory cortex of the brain. The size of the stimulus relates to the number of receptors triggered.

Mechanoreceptors respond to forces, including push and pull, which indicate problems with joints or the muscles surrounding the joints. The Pacinian corpuscles are sensitive to deep-pressure touch and high-frequency vibrations. The Meissner’s corpuscles detect light touch and are found in places of high sensitivity, such as the fingertips and lips. Merkel’s discs are found in the fingertip ridges and detect pressure and texture.

Thermoreceptors respond to temperature. Receptors that do this include Ruffini’s endings (for heat) and end bulb of Krause (for cold). Interestingly, the skin cannot tell us the exact temperature of something, rather it senses the temperature changing from its current state to something new. Chemoreceptors respond to substances produced by the skin itself. Nociceptors help to detect painful stimuli and can react to cuts or scrapes, burns or chemical stimuli such as an insect sting, responding to threatened or actual damage to the tissue cells.

The sense of touch is the first sense that a human develops! 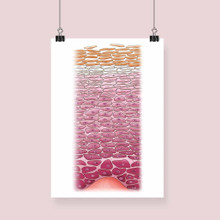 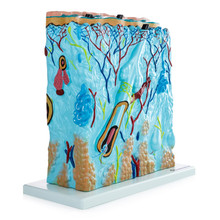