Joints of the body

Joints are where the bones in our body meet, holding the skeleton together and allowing it to move in several ways. Joints can be classified by their function or structure.

Functional classification is based on the type of joint movement: synarthrosis (immovable), amphiarthrosis (partly movable) and diarthrosis (movable joints).

Structural classification is based on the three tissue types that make up the joint: synovial, fibrous or cartilaginous joints.

Synovial joints allow for several different ranges of motion throughout the body. They can be broken into more categories based on the shape and structures of the joints, including hinge, saddle, condyloid, ball and socket, and plane joints.

Hinge joints can be likened to a door hinge. They allow bones to move in a single back-and-forth motion. The elbow joint is a strong hinge joint involving the humerus, radius and ulna, that allows the flexion and extension of the forearm. Saddle joints involve two bones having a concave-convex surface which interlock like two opposing saddles. They are highly flexible joints, an example including the thumb carpometacarpal joint, where the first metacarpal bone (thumb) meets the trapezium of the wrist.

Condyloid joints refer to when a shallow, curved depression of one bone is met by a round end of another bone or bones. They allow for flexion, extension as well as limited lateral movement. The radiocarpal joint is a condyloid joint where the radius bone (shallow depression) meets the scaphoid, lunate and triquetrum (rounded carpal bones).

Ball and Socket joints are where the rounded surface of a bone moves within the depression of another bone. Examples include the glenohumeral joint of the shoulder where the humerus meets the scapula and the hip joint, where the femur meets the acetabulum of the pelvis.

Plane joints are also referred to as gliding joints. This type of joint is formed between two flat or mostly flat articular surfaces of bones that enable them to slide over each other. An example of this includes the tarsal bones of the foot.

Fibrous joints are bound by strong, fibrous tissue. Two examples of this include suture and gomphosis joints.

Suture joints are fibrous joints that occur only in the skull, holding the bony plates together, called cranial sutures, including the coronal, sagittal, lambdoid and squamosal sutures. These sutures remain flexible in infants until their skulls have fully grown, usually around the age of two.

A gomphosis joint is a fibrous, mobile socket joint. The only examples of this type of joint include the roots of teeth that fit into the sockets of the maxilla and mandible of the skull.

Cartilaginous joints refer to when the bones are joined entirely by either fibrocartilage or hyaline cartilage. Two examples of this joint include synchondrosis and symphysis.

Symphysis joints are fibrocartilaginous joints where the body of a bone meets the body of another bone, connected by cartilage. Two examples of this type of joint include the intervertebral discs of the vertebral column and the pubic symphysis of the pelvis. 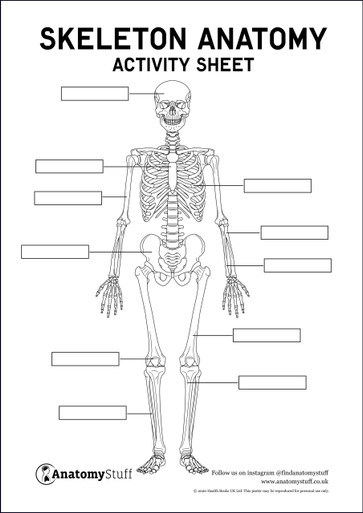 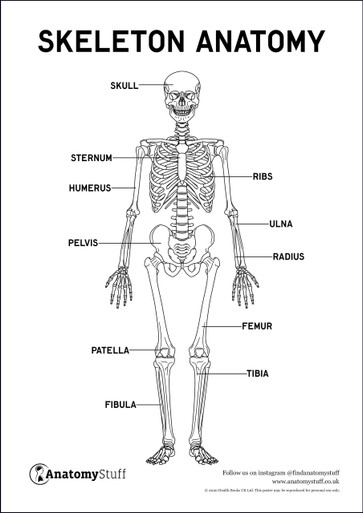 The “pop” sound your joints make is the release of built-up gas and fluid when the joint is stretched! 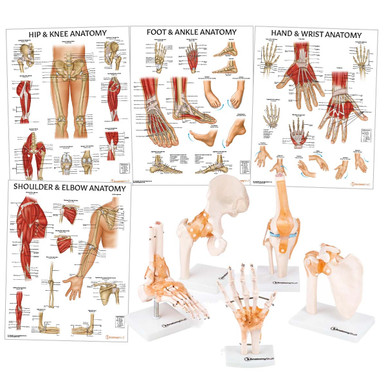 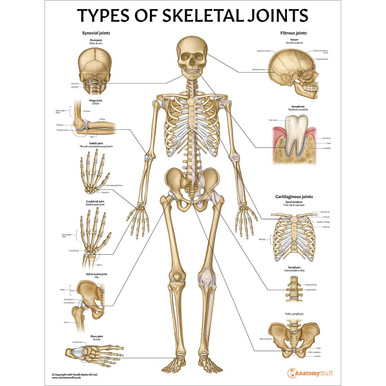 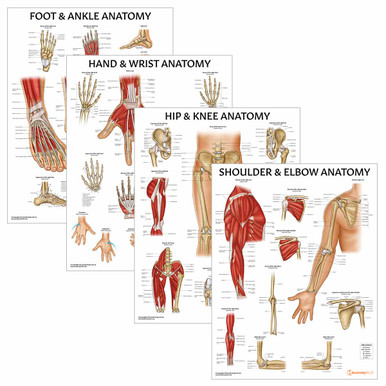